No One Seriously Injured

*Below are 2 short videos and one still image from the scene of the accident.*

At around 2:17 AM on San Vicente Blvd. just north of Beverly Blvd. and South of Melrose in West Hollywood, California, a minor car accident happened.

Fortunately no one was seriously injured. (This is a reminder to drive safely and sober)

However, the cars got some pretty heavy damage.

The driver of the green car in the still photo below took most of the damage and appears to have rear ended the other vehicle.

The driver was seen earlier partying in Fiesta Cantina at 8865 Santa Monica Blvd., but must have been a designated driver, or at least sober enough not to have any trouble with the West Hollywood Sheriffs on the scene.

No arrests were made on the scene, and as of 3:44 AM this remained the same. I called the Sheriffs Office to confirm. There were no injuries at all. 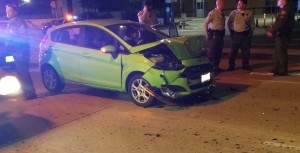